Another week, another console launch and another trip aboard the hype train to look at the final of the three next-gen home consoles. This time, it’s Microsoft’s effort at a new console with the Xbox One.

Unlike Sony whose PlayStation 4 is trying to be a thoroughbred gaming machine, the Xbox One is aiming to be an all-in-one box for the living room thanks to TV integration, apps, Smart Glass, Kinect, a Blu-Ray player and the occasional ability to play a game.

As we did with the PS4 hype train post, let’s start with the hardware specs for the Xbox One.

As I mentioned last week, the comparative specs of the PlayStation 4 and Xbox One are very, very similar. The major difference is in the RAM and GPU. On paper, the PS4’s advantage gives it a power advantage of around 40% according to Anand Shimpi of AnandTech.

I don’t know if running at 720p rather than 1080p at console launch is an indictment of the Xbox One’s comparative lack of power. From a PC gamer’s perspective, I could understand the advantage of going down to 720. A lower resolution allows you to crank up the other detail settings without overworking your rig in the same way you would if you were running at 1080p. At some point, though, Xbox One devs have to catch up to the PS4’s resolution so it isn’t perceived as an inferior console.

While everyone was expecting the new Xbox to be called the 720, the name “One” seems fairly apt for it. After all, Microsoft has been pitching this as a sort of all-in-one box for your living room rather than it just being a video game console with a few ancillary apps to run entertainment when you’re not playing.

The XB1 has all the usual Netflix and other streaming apps, locked behind the Xbox Live paywall, but seeing as your smart TV can do the same, that’s not a selling point. 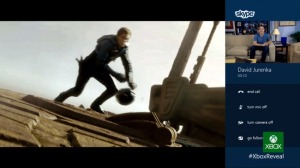 What is a selling point is the TV integration that allows you to watch TV through your Xbox and changing channels through Kinect voice recognition or the Smart Glass app for your mobile device. It may seem needless at first but pairing it with the app “snapping” that allows you to run two apps simultaneously in a picture-in-picture sort of mode is kinda neat. It’s gaming for the ADD generation. Game in the big screen and a TV show or your Twitter feed or the NFL or Netflix in the corner. I can see the appeal for some even if I’d find it to be a bit of a needless distraction.

Speaking of the Kinect, it’s back. For better or worse, it’s back and it’s a critical part of the Xbox One. The Kinect 2.0, for lack of an official designation, is supposed to be much improved over the over the original. It operates at 1080p resolution now rather than 480 for the original. That, along with the increase processing power of the console, should allow it to be better at actual motion controls than the original Kinect. But we haven’t seen any properly Kinect intensive games reviewed yet so we don’t know if it’s really a game controller or a TV remote. I’m sure the folks behind Steel Battalion

Xbox Live is still probably the biggest system seller that isn’t an actual game. It’s still $60 per year for your Xbox Live Gold subscription but you’re getting more Live servers and an improved matchmaking system. Live Gold also gets you access to the Xbox One’s game DVR and streaming services. Well, the live streaming service to Twitch isn’t available until some point in 2014 but it’ll be there.

I’ve certainly come a long way without mentioning the games but I suppose that’s because Microsoft has really pushed everything but the games in trying to sell the console. I guess if you want to expand beyond the core gamer base, you have to give them a reason to buy the Xbox One.

The general consensus is that the Xbox One has the stronger launch lineup thanks to having more exclusives than the PlayStation 4. Xbox flagship franchise Forza Motorsport currently leads the aggregate review scores which shouldn’t come as a surprise to anyone. For people being put off by the change in art design and Smart Glass integration that would require three arms, Dead Rising 3 has been received very well because it’s a fun game. Surprising how that works.

The other early exclusives aren’t faring as well, though. Crimson Dragon and LocoCycle are scoring below the PS4’s roundly panned Knack. Crimson Dragon is being accused of being an Xbox 360 game that was rushed on the Xbox One. LocoCycle, on the other hand, seemed to be trying for the it’s-so-bad-it’s-good approach. I’m not sure that’s the way you want to go with a new console launch title.

I suppose any preview of the Xbox One should come with a caveat about all the DRM and privacy concerns that Microsoft has addressed. It’s certainly come a long way since the original plan that would almost certainly kill the used games market, force you to be always online to play games and spy on you with Kinect. Microsoft should be commended for listening to their customers but also be slammed for thinking that going down that road was a good idea.

So are you adequately hyped for the Xbox One? We’ve certainly come a long way from the machine originally (and appropriately) dubbed the Xbone. But is it going to live up to the hype and be everything that you want from an all-in-one living room device sponsored by the NSA? Debate and flame away in the comments.