For the first time in 24 years, the IndyCar Series made its return to the Pocono Raceway with the second leg of the revived Triple Crown. That wasn’t the only return to happen this weekend. The race saw the return of Ganassi to the top step of the podium after a 13-race winless streak dating back to last season as Scott Dixon took the checkered flag to win the Pocono 400 and give Ganassi Racing its first ever 1-2-3 finish.

The day started with a different 1-2-3 sweep. It was the Andretti Autosport boys leading the way with a sweep of the front row. Marco Andretti led Ryan Hunter-Reay and James Hinchcliffe in qualifying. However, the Andretti 1-2-3 didn’t last very long. In fact, it didn’t even make it through the first corner as Hinchcliffe continued his feast or famine season with a Turn 1, Lap 1 crash to end his race nearly impossibly early.

When the race went back to green, there was some early jockeying for position before the cars started to string out. Marco Andretti took the lead and absolutely dominated the race. There was no question that he had the fastest car on the day. He was followed by RHR and Tony Kanaan who was looking to complete the Triple Crown after winning the Indy 500.

RHR’s challenge ended rather unceremoniously. Coming in for his second pit stop, Hunter-Reay was run into by Takuma Sato who flew into pit lane far too quickly and out of control. Sato was out instantly while RHR was able to get out to run a few more laps to collect points.

Subsequent to that caution was a green flag run that lasted until the end of the race. That made fuel mileage the key to success but that was one thing that Marco didn’t have. In fact, it seemed like he had the smallest gas tank among the frontrunners but that was likely because he used more fuel running in front than in the draft.

Fuel mileage and pitstops are what cycled the Ganassi cars up to the front and Marco backwards. Dixon took the lead after the third round of pitstops thanks to a steady march forward, good fuel mileage and spectacular stops from his Ganassi Racing pit crew.

That’s not to say that it was an easy win. Tony Kanaan made a challenge and ran up front but he damaged his front wing when passing Dixon and was forced to pit which took him out of contention. Charlie Kimball was also threatening to win his first IndyCar race but couldn’t hold off his more experienced teammate.

The win was Dixon’s first in the 13 races since the Mid-Ohio race last season. It was also Ganassi’s 100th team win and the 200th win for Honda in IndyCar. Kimball’s 2nd tied his best career finish which was set in Toronto last year and was his previous most recent podium finish. Dario Franchitti completed the Ganassi podium sweep in 3rd which marked his first podium since last season’s finale.

Will Power was the highest finishing Chevy driver in fourth. He was also one of only four Chevy cars in the top ten. Josef Newgarden tied his career best finish with a 5th. Simon Pagenaud showed that you can’t count him out on the ovals with a 6th place finish. Justin Wilson scored his third oval top ten in five races with a 7th. Helio Castroneves grew his points lead thanks to RHR’s troubles even though he only managed an 8th. Ed Carpenter crossed the line in 9th. And Marco Andretti could only manage 10th after dominating the first half of the race.

Just because he struggled earlier this season doesn’t mean that AJ Allmendinger is done with racing in IndyCar. Penske Racing boss Tim Cindric has said that the team is still looking for sponsorship money to run Allmendinger in more races.

Allmendinger got sponsorship from Izod for the races at Barber and Indianapolis but Cindric says the races at Long Beach and Detroit were funded by Penske Racing themselves. They aren’t willing to foot the bill to run him again without help. Can you blame Penske after Allmendinger wrecked out on Lap One in both Detroit races.

Allmendinger is expected to return for the final race of the season in California but might return for more if Penske finds the money. In the meantime, he’ll keep busy by running part-time in NASCAR Sprint Cup.

Could Izod be on the way out of IndyCar? Speed Channel’s Robin Miller made that statement in a mailbag column last week. He says that Izod would be ending its title sponsorship of the series after this season.

This isn’t a new story. Miller has been saying that changes at the executive level following Izod signing the title sponsorship resulted in less interest in IndyCar and less money put into marketing the series. It isn’t known who might step up to sponsor the series if Izod does leave. Menard’s was interested the last time but we don’t know if there is still that interest from either Menard’s or IndyCar. It was apparently IndyCar that turned down Menard’s for the more nationally known Izod. 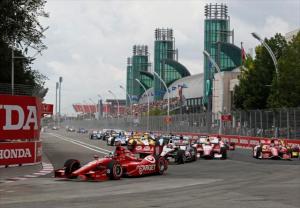 The next round of the 2013 IndyCar Series season is coming up next weekend. It’s time for another double-header weekend. This time, it’s the Indy Toronto on the streets of Exhibition Place in Toronto, Ontario, Canada. This will also be the first time that the IndyCar series does a standing start for a race when the Saturday race goes green. It is feasible as Champ Car had standing starts and they turned out quite well.

Two drivers have to be the favourites in Toronto despite not having a win in 2013. Will Power has won two races at Toronto while Dario Franchitti has three wins, including two in the IndyCar series. However, street races this season have been anything but predictable so we could legitimately see anything happen and anyone win.