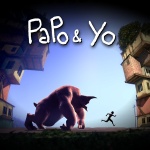 What make a video game a game? That’s a question that is being asked with increasing frequency. It’s also a question that one could ask about Papo & Yo. It’s a game with a story and a message hidden behind a metaphor but the actual “gameplay” is fairly thin. So does that mean it’s a game or a metaphor?

Spoiler Warning: The game is a metaphor. If you don’t want to know what it’s a metaphor for, you should skip the third paragraph below this one.

Papo & Yo is a story about a boy named Quico and his monster which is only ever referred to as Monster. The game sees you, as Quico, navigate a Brazilian inspired slum, or favela.

However, it’s not quite as simple as that. The game starts with Quico hiding in a closet and escaping into his imagination. The favelas aren’t actually real which allows for the puzzle-ish elements of this game. It also explains Monster, environment manipulation and other departures from reality. 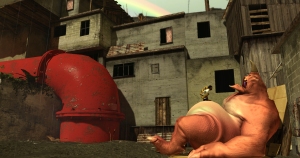 At the end of the game, the metaphor is peeled away as Quico is forced to see his situation as it really is. It’s still a powerful ending whether you know what the game is about from the start or just have it revealed at the end.

That revealing what the game was about at the end, however, can be a problem for some gamers because the gameplay isn’t much of a hook.

The game is described as a puzzle platformer but that’s a bit of a misnomer. It’s a third-person 3D platformer but the puzzle elements are very thin. There is very little that could be considered a puzzle. The puzzle sections aren’t exceptionally difficult. They’re more like speed bumps rather than road blocks between you and your goal. You’ll get through them. It’s not Portal level puzzles.

Unfortunately, while there isn’t much to the puzzles, it’s compounded by issues with the platforming. I found that the platforming was fairly imprecise which is a pain when your landing areas get progressively smaller as the game goes along. As such, I fell a lot. Even running along surfaces that looked like there were no gaps, I found myself going for a long drop. A bit more time should have been spent there. 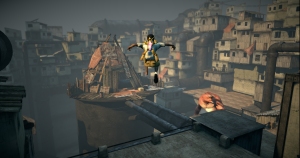 Fortunately, while the gameplay is a bit thin, the presentation makes up for it. The favelas look pretty good. There’s a lot of detail to the world from the colours to the scope of the favelas. The textures were okay but nothing special and suffered from occasional pop-in. The dynamic shadows and lighting were absolutely fantastic, though. The lighting effects are just amazing and really are among the best I’ve seen from an Unreal Engine game.

The music was absolutely spectacular. If anything could be called the highlight of this game, it’s the soundtrack. Papo & Yo’s soundtrack is dominated by a Latin American-inspired acoustic soundtrack that includes a bunch of traditional Latin American instruments. It’s a damn good soundtrack for an indie game and it was definitely worthy of that Canadian Videogame Award nomination.

The presentation isn’t perfect. The framerate tends to drop any time there’s a lot of action on-screen, especially when Monster gets violent. The camera is terrible. It gets caught behind Monster when he chases you and the zooming in and out during platforming is disorienting and frequently resulted in me missing my jumps. 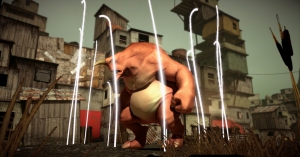 As a game, removed its story and pared down to just the core elements of gameplay, there’s not much to Papo & Yo. As a game, I might give it a four or five out of ten.

This isn’t a game, though. It’s a story and a life lesson and an experience. Like so many recent games, Papo & Yo uses a video game as an interactive story telling medium rather than just making it a game in and of itself. As a result, the whole is greater than the sum of its parts.

Papo & Yo was reviewed on PC but is also available on the PlayStation 3. Your impressions of the game may differ depending on the system played on and system specs.

One thought on “Papo & Yo Review: A Game in a Metaphor”