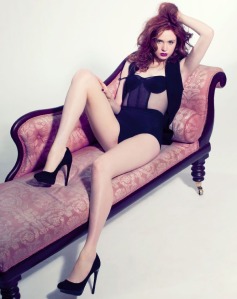 Kicking things off is Doctor Who star Karen Gillan. Insert gratuitous finding her under my tree joke here.

Let’s start our pre-Christmas linkdump with a family story. Here’s a profile of Brian Burke and a look at how he coped with his late son coming out of the closet and later dying in a car crash. (GQ)

And back to the usual fare. Here’s a Christmas message from atheist Ricky Gervais about why he’s an atheist. (Wall Street Journal)

Drew Magary has his list of 10 things would be better off without. Happily, religion is at the top of the list. (Deadspin)

After the jump, the NHL on The Price is Right, the People vs. Superman and a video.

Ken Tremendous talks about why he hated Joe Morgan as a baseball announcer. At least it’s not personal. (Fanhouse)

Ron Artest held an art show in Toronto recently. That is all. (Sportress of Blogitude)

We linked to Crosby and Ovi on The Price Is Right on Sunday but here’s all the videos from that episode including Jeremy Roenick playing Cliffhangers. (With Leather)

A pair of lawyers in the US are holding hypothetical trials involving superheroes. The results are pretty funny and might even hold up in real court. (New York Times)

I’ll be looking at more year-in-review type stuff on Sunday but for now here’s the year’s biggest US political lie. Naturally, it was from the Republicans. (PolitiFact)

If you haven’t finished your Christmas shopping yet, might I suggest avoiding these gifts which are generally thought of as totally useless. (Ego TV)

Perhaps entertaining is your way of doing Christmas as opposed to extravagant gifts. World famous chef Wolfgang Puck has some tips to help you with that. (Ask Men)

Facebook has undergone another redesign. Or so I’ve been told, I’m not on it and am quite happy being only on Twitter. Anyway, some folks are making the best of the new layout by doing fancy things with their profile pics. (Mashable)

Here’s a fun infographic with 15 things you may not have known about Star Trek. Well, I think we all know about the red shirt guys. (Fork Party)

Even as gingerbread men, the guys with the red shirts don’t last long. (Foxtrot)

DJ Steve Porter is a genius. He’s done one of his famous with Don Cherry quotes. It’s beyond brilliant.

Steve also did a remix of Leafs and Canadiens quotes ahead of their game that was broadcast in 3D.

Patrick Kane’s got his own theme song now. It’s a parody of I’m In Miami Trick called I’m In Chicago Trick.