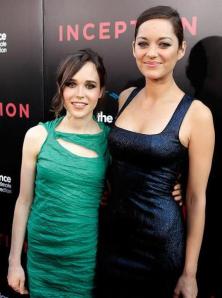 Inception is finally out this weekend! I’m sure there are plenty of folks intrigued by the trailers and all the buzz surrounding the film, but if you’re still not interested, here are two reasons why you should go: Ellen Page and Marion Cotillard.

Ellen Page was on Jay Leno recently to promote the release of Inception. She was asked to list some fun facts about Halifax and struggled a bit. Being the awesome host Jay is, he didn’t really bail her out. (NBC 1) (NBC 2)

Before you all head out to the theatres to watch Inception this weekend, perhaps it’s a good idea to take a look at the comic book prequel. (Yahoo) Ok, perhaps it didn’t really help (since I’m positive Inception is one of those movies you need to watch several times to get an idea of what’s happening).

The complex story of Inception generated some concerns about the film being a potential box office failure. Now this brings up the topic of box office bombs. What happened to them? I don’t think there are any big budget disasters that are making headlines everywhere anymore! Oh by the way, Jonah Hex doesn’t count. (Slate)

Time for a quick series of first looks!

First up is the Green Lantern! (iFanboy)

Now I’ve wanted to check out Sucker Punch for a while and after seeing this picture featuring Emily Browning, Vanessa Hudgens and Jamie Chung… I’m definitely going to see this movie. (JoBlo)

A description of the Transformers 3 opening sequence has leaked! Given that Revenge of the Fallen was a dud, this one looks a bit promising. I don’t know about you, but after reading it, I can’t help but think  there’s a Spielberg touch to this. (CHUD)

There are high expectations for the Tron sequel and Disney does not want to disappoint the audience out there. Given that the company has tons of resources at hand, might as well put them to good use. Here’s a fine example: give the movie the Pixar touch! It’s bound to improve the quality of the film and perhaps make men cry at the theatres. (Entertainment Weekly)

Since comic book prequels are the rage right now, the upcoming vampire flick Let Me In has one as well! (io9)

M. Night Shyamalan’s career trajectory isn’t looking good. Ever since the release of The Sixth Sense, the quality of his films have been on a steady decline. If you take a look at the graph provided in the link, he just might be the first ever to achieve a negative tomatometer. (Slashfilm)

Trailers aren’t supposed to be exactly the same as the final film product. There are obviously specific scenes that are shot specifically for promotional purposes only. Many people have gone up in arms with regards to the Predators preview and now the producer has to speak up. (MTV)

Okay, Michael Cera gets a lot of criticisms about using the same schtick in his movies. For those who are bored of watching him play the same guy over and over again in movies, you should check out some of the interviews that he does including this one. The man does have a good sense of humour. (Movieline)

After the teaser trailer was released not too long ago, here’s the full length preview for that Facebook film The Social Network. (Yahoo)

While all the buzz is surrounding the above film, don’t forget about ‘The Other Social Network’! (BWE)

While we’re on the topic of movie trailers. Here’s a nice revamped version of What Women Want featuring more Mel Gibson. (NY Mag)

Not a good sign for FOX’s upcoming show Terra Nova. (Collider) So… still feeling confident about this show folks?

Just for kicks – a tutorial on how to write the next great alien language. (io9)

On the upcoming season of Shaq vs. he will take on Justin Bieber on the dance floor. This is going to end well… (Entertainment Weekly)

Comic-Con thought the piranha infested bikini contest scene from the upcoming Piranha 3D was a bit too gory and asked the director to tone it down. The director chose to tell them to piss off. (NY Times)

The Big Bang Theory will crush its competition on Thursday nights this fall but Community is not going down without a fight. Betty White is coming in to save the day!!! (The Hollywood Reporter)

McFly is back!!! With the untitled fifth album slated to hit stores later this year, the boys are back with a slightly different sound. With the addition of dance and synthetic beats, they are aiming to storm the top 40 charts across the world. (Heatworld) (BBC)

Even America is willing to embrace the band from the UK! Yes, we’re all willing to forget about that movie Just My Luck. (NY Post)

In addition to a new sound, they also got a new look. Let’s say they got a top Hollywood photographer who’s had past experience with Spiderman and X-Men to do the promo shoots. (The Sun)

At the ESPYs, Steve Carrell and Paul Rudd decided to poke fun at LeBron’s “The Decision” that took place not too long ago. Like a good portion of you out there, I didn’t have anything better to do and decided to watch The Decision, which was regretfully a waste of time. In this hilarious spoof, Steve Carrell got some big decision to make while Rudd plays the interviewer who is trying to stretch out 10 second decision announcement into an hour long program. To those that are wondering, no it doesn’t involve The Office.

Just because I’m so pumped about Scott Pilgrim vs. the World, here’s a short featurette on the film that features a few new scenes including one of the best lines I’ve heard in a long time.

The folks at Improv Everywhere are at it again! Their latest video features a staged reenactment of the first Princess Leia / Darth Vader scene from Star Wars. Except this time, it all takes place on a New York City subway car.

4 thoughts on “Entertainment Link-Off: It Was All A Dream”