Alright Lowdown Blog readers, are you ready to get your Glee on? The series just aired the director’s cut of the pilot episode this past Wednesday (along with that tweetpeat thing) on FOX. If you’re not singing along to Don’t Stop Believing right now, you should be. Anyway the season premiere of the show will be airing this Wednesday at 9 pm on FOX (and Global in Canada).

Headlining this link-off post is Dianna Agron because she’s part of the awesome cast on this fantastic show!

After the jump, a bit more on Glee, NBC’s journey to epic failure (almost), K-Fed is a tub of lard, Disney buying Marvel might not be a bad thing after all and singing on X-Factor is a very ‘hard’ thing to do.

The movie studios don’t want you to know this, but this is their secret on how to become successful (and mooch money off all the filmgoers out there). (Film.com)

When a girl dumps you, the best way to get back at her is to write a film about her. Scott Neustadter writes about his experiences and how it is linked to the brilliant film 500 Days of Summer. It’s a slow weekend at the box office, so if this is still playing at a theatre near you, go see it! (Daily Mail)

Looking for words of wisdom from Confucius? Yeah it’s not happening since the trailer for the Confucius film doesn’t contain any dialogue. (Latino Review)

Tron Legacy and The Green Hornet will be battling for box office bucks on December 17th 2010. So… which movie will blink first and shift to a different date? (Slashfilm)

Woody Harrelson is on a roll. We get to see Woody play Woody in Zombieland (which is coming out this October) and now we get to see him play a quasi-crazy superhero in the film Defendor. Any superhero that uses marbles and lime juice to fight crime is good in my books. (Slashfilm)

Kevin Smith just recently wrapped up filming for the cop-comedy A Couple of Dicks. However it seems like he didn’t get along with the film’s star Bruce Willis. I think. (The Toronto Star)

Speaking of Kevin Smith, prepare for a 24-hour Q&A tweet-a-thon with him on Labour Day! (ScreenCrave)

Marvel wants to convert Iron Man 2 into 3D. This has bad idea written all over it. (AICN)

Rejoice! If all goes well, we could be seeing a Pixar/Marvel film! In other news, Disney had ulterior motives when they snatched Marvel for $4B. Apparently they want to “go after boys more aggressively”. (Slashfilm)

Ok, these weren’t released because of Disney’s acquisition of Marvel, but they do provide a nice picture of what could come out of this blockbuster deal. Imagine this: evil Disney princesses! How about an evil version of Simon and Pumba? (JoBlo)

We’re doomed. The Jay Leno Show is the future of TV! (Time) Oh by the way, the article messed up Ben Silverman’s name in the first page. That clearly shows how important he is.

Another example of NBC’s epic-failure: their new ad campaign. (Variety)

Well not everything on the network is all doom and gloom. Community looks pretty funny. For those in the US, you can head over to their main website to catch webisodes and the Q&A session. For those unlucky ones outside the US (*shakes fists at NBC*), hopefully this article will do for now. (Collider)

Another bright spot on the network is Chuck. Fellow Nerd-Herders, there is some good news. There’s more eye candy this season!!! First, Kristen Kreuk is going to work at the Buy More. (Ausiello) If that wasn’t enough, Angie Harmon is making a guest appearance too! (Ausiello)

While we’re anticipating the return of Supernatural, let’s take a look back at the Supernatural silverscreen showdown that occured at the beginning of this year. I agree with The TV Addict on this one… Jensen wins. (The TV Addict)

I normally don’t give a crap about celebrity gossip or anything like that, but this was too funny to pass up. Seems like K-Fed has really let it go since his relationship with Britney fizzled. (Just Jared)

Tip of the day: Never call Russell Crowe fat or criticize his workout routine. He will challenge you to a cycle duel. (BBC) 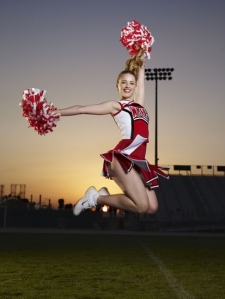 I’m throwing in another Dianna Agron picture here… just because I can. Alright, time for some Glee related news.

The season premiere on Wednesday takes place on the same day and time as the Obama address. Fear not fellow Gleeks, the show may actually benefit from this since it will be considered as alternative programming (the other big networks will be airing the address). The only other broadcast network airing original stuff is The CW, but we all know that they don’t really matter. (TV by the Numbers) Obama may be a great speaker, but I think Glee is much more appealing at the moment.

Check out the behind the scenes for the Glee cast’s version of “Gold Digger”. (Myspace) This episode featuring the song hasn’t even aired yet and I already have the tune stuck in my head. Who knew Matt Morrison could rap so well?

It’s nice to know that there are many talented directors out there that are capable of making a good Halo movie. Here is the live action commercial for Halo 3: ODST directed by Robert Sanders.

I know it’s very exciting to sing in front of a large audience… but this man got a little too excited.

Finally, here’s an acoustic performance of “Two Is Better Than One” by Boys Like Girls. The album version of the song is actually a duet with pop/country singer Taylor Swift. The song will be featured on their second album called Love Drunk, which hits stores on Tuesday.

One thought on “Entertainment Link-Off: Get Your Glee On!”